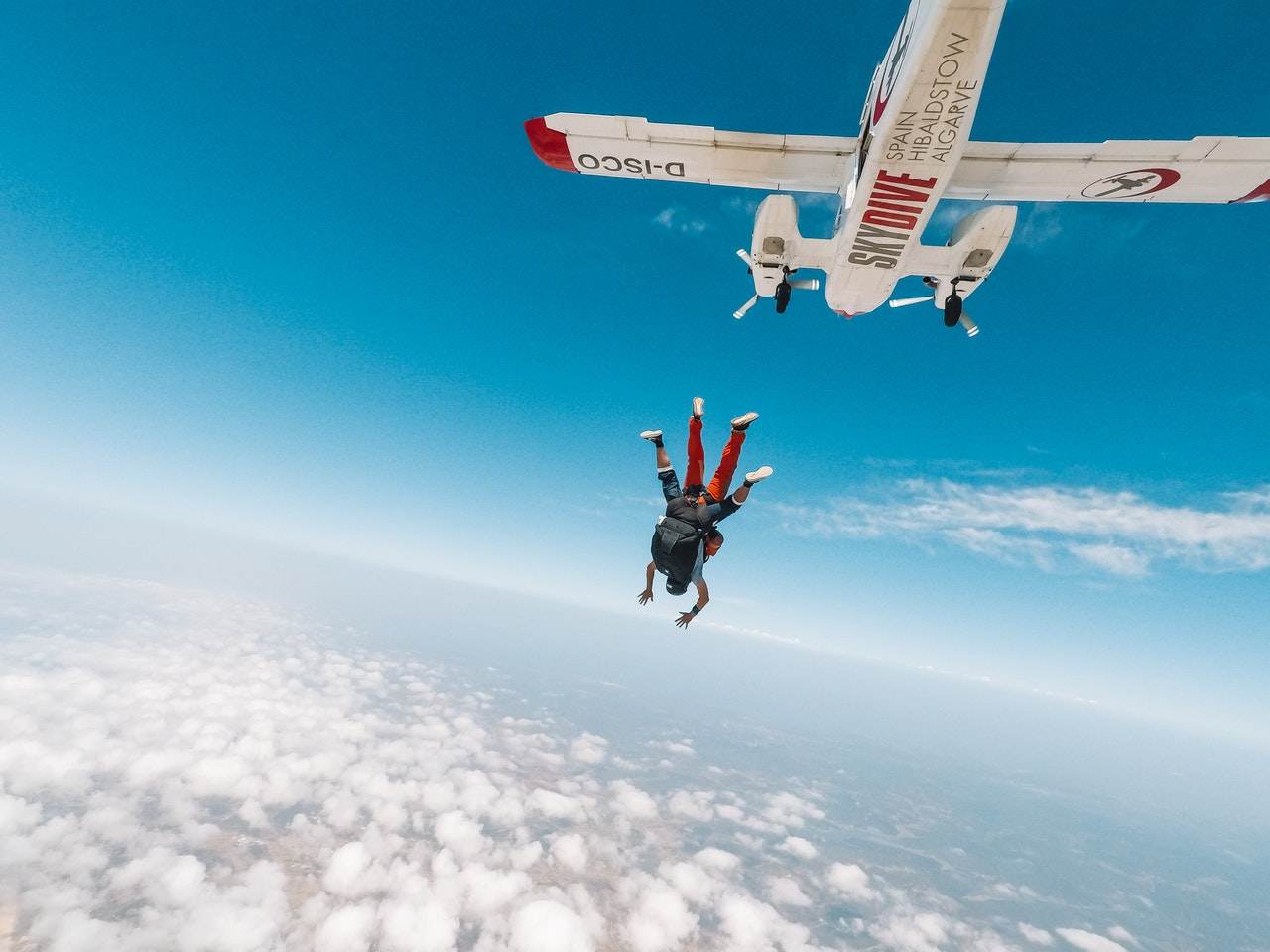 Have you ever felt the rush of adrenaline during any adventurous travel like skydiving? Do you know the skydiving price in Nepal and with different tour packages? Are you feeling like your life is filled with boring stuff to do on a daily basis? Have you heard of skydiving in Nepal and the records behind it? Well my friends! If your answer is no, then you got to experience the thrill behind it once, especially in Nepal. People from several countries visit Nepal for different adventurous trips which makes them feel more lively!! Skydiving is one of them. There are many interesting stories which many people have experienced. We can hear them all over social media.

Yes, we know what you are thinking!! Alright and we agree that skydiving is somehow a dangerous activity to do. But let's not forget that there are many officials who are working for it and for the safety of those people who participate in such activity. SO!! Let us tell you one thing if you have ever felt the rush of adrenaline then you may also know how it feels and when the feeling comes while you are having boring days, how it changes the mood!!. Just imagine the 360 degree view of mountains surrounding you and the feeling of flying high in the sky. Isn’t it something which anyone wanna see? So if you are in Nepal or if you are about to visit Nepal then you shouldn’t miss the chance of skydiving. One professional skydiver also said, “Skydiving in Nepal from Everest should be one of the best activities to do before dying if you are there.”

There are more than eight years of work for the management of skydiving events and their locations in Nepal. We don’t wanna bore you with all the details if you wanna know about that then it would best if you visit this like https://www.himalayanglacier.com/seven-years-in-nepal-the-story-of-everest-skydive/ .Besides that we wanna share some major and interesting events which has happened in past. There have been several records made by different people in skydiving while staying in Nepal. In 2008, an international skydiver took one of the highest dives on earth from the tip of Mount Everest (8,848m). Then again, in the same year, 32 Sky jumpers from 14 different countries created history by jumping all together from above the Everest. That day it is said that all of them had taken part in the ‘record-breaking skydiving event’. Three people; New Zealander Wendy Smith, Canadian Neel Jones and Briton Holly Budge; made a record by skydiving from 1000 feet above Mt. Everest.

A Pilatus Porter aircraft, which has the capacity of flying up to 44,000 feet, took the divers above Mt. Everest for the ultimate jump. The first person to do a solo jump was New Zealander Wendy Smith, who is also a World Champion in skydiving. “ I felt both excited and strange at doing this. I had 6 seconds free fall and could clearly look at Mt. Everest,” remarked Smith after the fall.

The aircraft had taken the divers southeast of Everest at 12 nautical distance. The landing point was at the Syanboche Airstrip at above 3000m. The skydiving project was planned by Briton Nigel Gifford and was participated by jumpers from Britain, America, Canada, Pakistan, Iraq, Australia, South Africa, New Zealand among others.

-Source of the records himalayanglacier.com

Can you believe it? These records are so really to hear that those people did the almost impossible tasks. Those people not only didn’t refuse the fact that they felt the fear but also said that they enjoyed those moments. Along with those record creating people, there have been many people who tried skydiving in Nepal and agreed to the record maker's words. This is also true that skydiving is expensive but in comparison to other countries it is on the average scale.  Nepalis are charged Rs 75,000, for Indians it is Rs 80,000 and it costs US$800 for foreigners.

So far more than 100 foreigners have skydived from Everest since it was launched in 2008. For the Everest skydive solo jumpers pay US$25,000 and a tandem jump is priced at US$35,000. -source explorehimalaya.com

💁 For the people who usually calculate the profits earned from certain investment, they are sure to ask this question on regular basis. So the answer for this is yes!!!😌 The reason for it is it gonna give a once a lifetime experience which everyone wanna hear about which might encourage the feeling of unity among many people since sharing experience is a way of connecting yourself to other people. Not only that if people go with their families or with their beloved ones, these experiences or the memories of such events are gonna create a strong bond between them which is very important to stay happy in a psychological way.

NOW!!! If you are starting to have the feeling of trying skydiving and if you wanna try it in Nepal let me give you some information first. The divers from Mount Everest in Nepal get to have the visual of the highest dropzone in the world ,Gorakshep, Kala Patthar and those who go for the Pokhara skydiving spot, they get to see the fewa lake. In Nepal, these are the main 2 skydiving spots till now.

Mount Everest Skydiving and Its Price in Nepal

In the month of March and October, Everest skydiving in Nepal occurs from the dropezone of Shyangboche. Skydiving not a cheaper task so get affordable skydiving price in Nepal and enjoy the ultimate adventure. Why are only these two months most suitable? It is due to the lowest wind speed and the clearest skies because of which the airbus As350B3 and the most experienced mountain pilots of Nepal don't get any disturbance. The jumping altitude for the divers is between 6,000ft to 10,000ft. The beginners get the company of jumpmasters or the tandem coach. For those who want to get their journey to the landing spot from the diving point recorded in a camera can get a cameraman for some fee. The trip starts from Kathmandu to the airport of lukla(located on a hillside platform, surrounded by hills from both sides) flying through it is itself a living experience. After arriving at lukla, the jumpers will walk upto Namche Bazaar(the capital of the sherpa nation) for 2 days in the shining river valley.

After a walk of one hour, divers reached the skydive Nepal drop zone, Shyangboche airstrip. But the divers are sent for the drop on the spot; they are given one night stay for familiarizing with the drop zone and with the orientation before sailing. Skydiving in the Himalayas is a tough challenge, but with the team of professional jumpmasters, tandem teachers, security officers, pilots, doctors, and ground crews the risks are reduced. A detailed briefing along with acquaintance with the DZ will be given before every Skydive. Before you strap in your parachutes, the  jumpmasters and the tandem instructor will examine all protocols and safety measures.

Skydiving from Pokhara: The Ultimate Adventure in Nepal

Pokhara, the city of sensation which is located around 124miles or 200km west of kathmandu has many beautiful serenity like Machhhapuchhre, Annapurna, Manaslu, Dhaulagiri highlands and emerald lakes supported by the himalayas water. Along with the addition of the skydiving attraction is shining more than ever from 2013. With the guidance of experts from Everest skydive crew, each autumn at the dropzone of Pamelauruk (11km north of Phewa lake) they were able to organize the skydiving event with 147 jumpers from around the world in 2019 alone. They changed the point of skydiving being the cause for a rush of adrenaline to the means of sight seeing of many beautiful sceneries. They perform skydiving at a height of 11000-13000 ft from AS 350 B3/B2 Helicopter. Get information about the skydiving price in Nepal and enjoy the adventure!!

Some other top-rated tourism places in Nepal are: