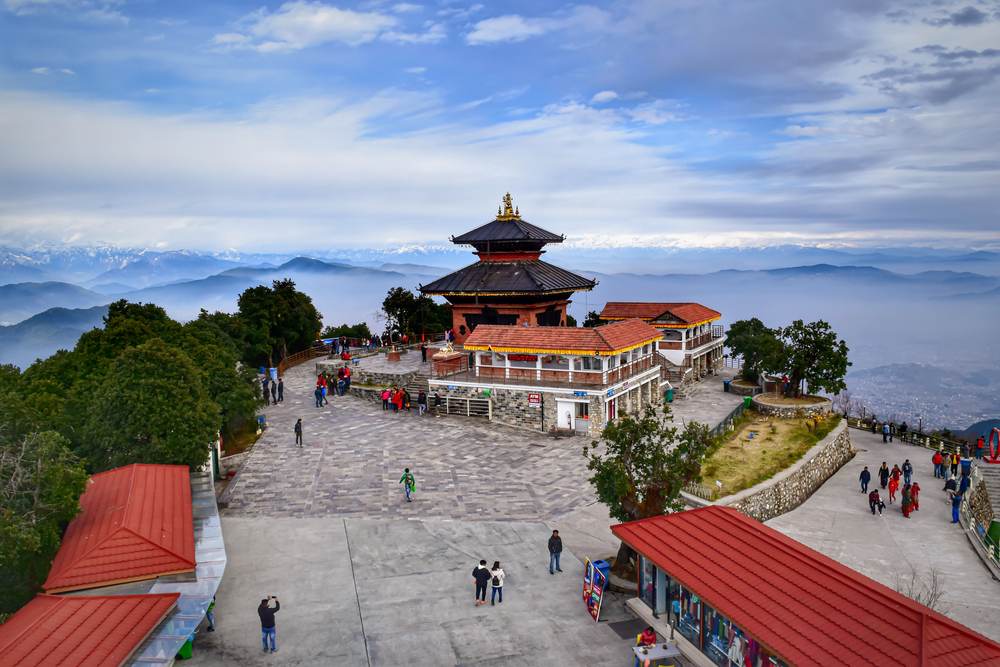 Chandragiri is a town in the Kathmandu District of Nepal. Chandragiri Hill in Nepal, with its Cable Car, is one of the city's primary attractions. Chandragiri Hill is 16 kilometers from Central Kathmandu and is 2551 meters above sea level. It is located in the South-West of Kathmandu Valley. Shivapuri (2732m), Phulchowki (2695m), and Nagarjun (2695m) are the four hills that surround Kathmandu Valley (2095m). Chandragiri is accessible by cable car, automobile, or hike. This route saw the start of Nepal's second cable car, after Manakamana. The cable car ride is around 2.5 kilometers long and takes between 9 and 14 minutes, depending on the wind speed. Seeing Kathmandu Valley, the countryside, and the mountains from the cable car is a thrilling and enjoyable experience. From the peak, you can see the Kathmandu valley and the Himalayan mountains, from Annapurna to Everest. It's a simple one-day trip from Kathmandu's central valley. The Chandragiri Cable Car connects Thankot with Chandragiri. The cable car system has 38 gondolas with a capacity of 1000 passengers per hour.

he historical significance of Chandragiri Hills cannot be overstated. It was from these slopes that King Prithivi Narayan Shah first saw a considerably more scenic and rich Kathmandu valley, which prompted the king to consider annexing the valley to his kingdom. Prithivi Narayan Shah is said to have gathered spiritual qualities for the unification process after undertaking rigorous ‘sadhana' or meditation at these hills, according to legend. To avoid being identified by the Malla Kings of Kathmandu Valley, the Gorkhali King disguised himself while ascending the hills.
King Prithivi Narayan Shah was eager to annex and eventually declare Kathmandu the capital of undivided Nepal, according to his ‘Divyopadesh' (Divine Preaching). He first saw the valley while returning to his kingdom in Gorkha from his in-domain law's in Makwanpur, according to legend. BhanuAryal and KulanandaDhakal, two astrologers who accompanied the monarch on that trip, predicted that their king's dream to take over Kathmandu would come true. According to legend, BhaleshworMahadev fulfilled King Prithivi Narayan Shah's wishes after being impressed with his tenacity and Sadhana.

haleshworMahadev appeared at the location where Satidevi's 'Bhala,' or forehead, fell off her dead body, according to the narrative described in Himvatakhanda. Satidevi, Shiva's consort, is said to have given up her life by jumping into a fiery pyre at her father DakshaPrajapati'syagna (holy fire ritual) when Daksha insulted her husband Shiva in front of the religious ceremony's dozens of gods and goddesses. Shiva became outraged and carried her dead body on his back, walking around the earth like a maniac for a long time, oblivious to Satidevi's decaying body.
Various ‘shakti-centers' were created at various locations where various sections of Satidevi's body fell during Lord Shiva's grief. At the same location where BhaleshworMahadev appeared, a temple was built. Gandharva, a low-ranking Hindu god named Sumukha, is also mentioned in the BhaleshworMahadev tale. Sumukha pressed her lips against Rambha, an angel who had lately resigned as a courtier at Heaven, which was said to be Indra's (lord of gods) domain. Sumukha was then punished by Rambha for his misdeed, and he was compelled to reside on earth, abandoning his heavenly home. Sumukha was roaming about the mortal world while under the curse when she encountered Galab, a wise man who offered Sumukha a means to repent and break the spell. Sumukha was advised by Sage Galab to offer daily penance by cleansing himself and offering prayers to BhaleshworMahadev. Fortunately, Mahadev was pleased in the end, and he blessed Sumukha, after which he settled down with Rambha. Bhaleshwor also took Sumukha in as a close aide.

1) Tower with a View
The view tower, which is 2,547 meters above sea level, offers an unobstructed 180-degree view of the beautiful Himalayas. The snow-capped summits, from the Annapurna ranges to Mt. Everest, seems to be just an arm's length away.

2) Children Playground
Everyone is welcome at Chandragiri Hills Children's Playground. The children's playground features interesting recreational equipment such as climbing ropes, swings, slides, seesaws, and a jungle gym to keep your kids entertained. Your child will never want to return home with so much to do!

3) Shopping in Chandragiri
Both the bottom and top stations have souvenir stores with a wide range of apparel brands and cultural items that are fairly priced and make excellent souvenirs of your visit. There's also a toy store to keep your youngsters entertained.

Chandragiri Hills is a short drive from the city and an attractive retreat. Chandragiri Hills, located just 7 kilometers from Thankot, Kathmandu, feels like a completely different universe. The natural refuge, which is at 2551 meters above sea level, is surrounded by temperate forest and has a spectacular view of the Himalayas as a backdrop. The nearest spot from Kathmandu to see the spectacular Mt. Everest is undoubtedly something you should not overlook. The location is also home to one of the most prominent Hindu temples, the BhaleshworMahadev, which is said to have wish-granting powers, as well as fresh forest air and a breathtaking perspective of the Himalayan panoramas.