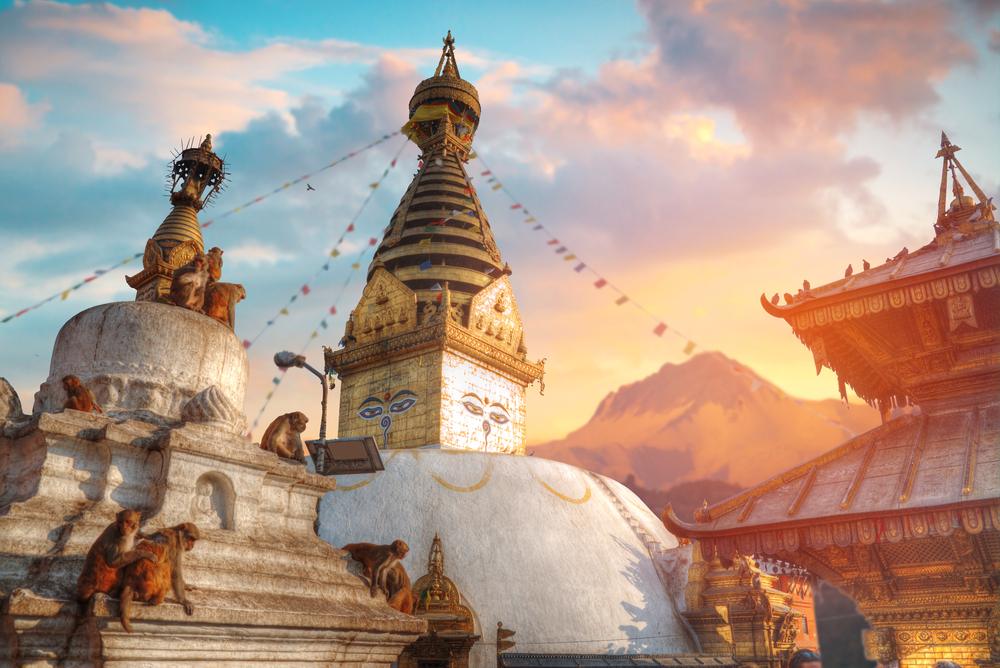 • The Monkey Temple gets its name from the abundance of monkeys that live in the area.
• Swayambhunath was light before it became a stupa, according to legend.Kathmandu valley was originally a huge primordial lake with a wondrous lotus radiating light, according to the SwayambhuPurana (Buddhist Scripture).
• The world is represented by the white dome, and the pair of eyes on all four corners are Buddha's eyes, symbolizing all-seeing perspective. The Buddha's eye on each side of the stupa looks in all directions over the Kathmandu valley.
• The SwayambhunathBuddist Museum is an archaeological site that displays Buddhist statues to depict Buddha's life. Look for a tiny red brick structure with an elaborate wooden door to find this museum.
• The Five DhyaniBuddhas (statue) may be seen above Buddha's eyes in the golden pentagonal toran.
• Five DhyaniBuddhas are Mahayana Buddhist images that can be found in Buddhist iconography. The five DhyaniBuddhas, Vairochana, Akshobhya, Ratnasambhava, Amitabha, and Amoghasiddhi, are transcendent entities who are envisioned during meditation.

An overview of Swayambhunath

Resting 3 kilometers west of Kathmandu, Swayambhu is one of Nepal's most holy Buddhist stupas. It naturally evolved when the valley was established about 2000 years ago from a primordial lake. This stupa is Nepal's oldest stupa and it has several shrines and monasteries. Find peace and prayers on the hill in north-western Swayambhunath Valley. It was named "Monkey Temple '' by visitors for whom the word twister was a language of the 1970s. Swayambhu offers a panoramic perspective of the city, overlooking most parts of the valley. The stupa existed for millennia as a characteristic mark of religion and harmony with Hindu temples and gods embedded in it. It has been stated that the glory of Kathmandu Valley began from here.

Swayambhu means 'self-existent,' literally. It was established by King Manadeva and became a significant hub of Buddhism by the 13th century, believed to date in 460 A.D. Swayambhu was formed from a lotus flower that flourished in the middle of a lake once stretched over the Valley. The Sakyamuni Buddha's largest image in Nepal is located on a high pedestal along the western frontier of Swayambhu, on the Ring Road. The temple of Manjusri or Saraswati is located behind the hilltop, which is the deity of learning. The stupa complex is filled with chaityas, statues, and shrines of Buddhist and Hindu deities. The base of the mountain is ringed almost entirely with prayer wheels and gods. Devotees can always be observed wandering around the stupa.

Swayambhu, the world heritage site of UNESCO currently, goes back to antiquity. The Great Stupa of Swayambhu's earliest written record is a stone inscription of the 5th century. The stupa was honored and restored on multiple occasions by kings, monks, and pilgrims alike. In 1349, an invading Muslim military devastated it and King SaktimalleBhalloka later rehabilitated it. The SangyeGyalzhen, a yogi, erected the wheel and spire to the dome of the stupa around 1505. In 1614, in the four cardinal directions, the 6th Shamarpa erected shrines into the stupa. In 1750, following a significant renewal, several renowned Kagyu lamas held a ceremony.
To help its uncle Drukpa lama, SherabDorje, restore and maintain the stupa in the early twentieth century, Bhutanese Master LopönTsechuRinpoches (1918-2003) the late abbot of the Bhutanese Drugpa Kagyu monastery in the western side of the stupa came to Nepal. The SwayambhuStupa was recently refurbished in May 2010.

1) The monastery of Karma Raja Maha: The Shri Karma Raja MahaRigpeDorje Monastery is the principal seat of H.H. GyalwaRangjungRigpeDorje in Nepal, led by Sabchu Rinpoche, on the northern side of the stupa. With the generosity of many Buddhist donors, the present monastery has constantly evolved since its inception. At the beginning of the 70s, the 16th Karmapa stayed several months here to provide hundreds of disciples extra empowerment, teaching, and publicity. Then the monastery continued under his guidance the traditional monastic curriculum and meditation.
The 14th KunzigShamarRinpoché (a second highest lama in the Karma Kagyu lineage, the reincarnation of which includes identification) watched after the monastery following the death of the 16th Karmapa, then gave it to H. H. Gyalwa Karmapa 17th, TrinleyThayeDorje. Now, there are 60 monks at the monastery.

2) The lineage of Karma Kagyu: The Kagyu tradition is a lineage of direct oral transmission and is one of the four main schools of Tibetan Buddhism. It particularly appreciates meditation and can bring about the entire understanding of the nature of the mind through interaction with a skilled teacher. One of the oldest and most common subschools in the Kagyu tradition is Karma Kagyu. It transmits the methods imparted to its closest followers by the historical Buddha Shakyamuni. These methods were passed through Gampopa and Rechungpa to the 1st Karmapa DusumKhyenpa, through Indian teachers Tilopa, Naropa3, and Maitripa and famed Tibetan yogis Marpa and Milarepa (1110-1193). He was the originator of Tibet's major headquarters. Since the 1960s, teachers at Karma Kagyu began studying and practicing Buddhist lessons outside Tibet. This offer is now available worldwide.

The Shamarpas and the Karmapas of Swayambhunath

The first recognized embodied Tibetan lama was Gyalwa Karmapa. The Karmapas were the head of the Karma Kagyu lineage throughout many centuries. Karmapa has kept the transmission alive and robust to this day with the succeeding conscious renaissance. H.H. The 16th Gyalwa Karmapa, who left Tibet following the 1959 Chinese taking over Tibet, ensured that the Karma Kagyu lineage would be preserved. With his Western students, he founded new monasteries and centers, bringing the true nature of the mind to the modern world.
H. H. The current Gyalwa Karmapa 17th in TrinleyThayeDorje tours Buddhist centers around the world to teach the unbroken teachings and offer practical ways and counsel for daily life, along with other important Masters from Karma Kagyu School.

Extremely steep steps leading to the shrine are a difficulty. But in my opinion, you must visit this stupa once in your lifetime. There is also, however, a motorway which is nearly up to the summit, a short walk away. Swayambhu will be visited all day long by many Buddhists and Hindus alike. Maybe the best venue to observe religious harmony in Nepal is this shrine. On Buddha's anniversary, which normally falls every year in May, the greatest crowd may be seen here. So this can be your chance to visit the stupa next time during Buddha Jayanti.