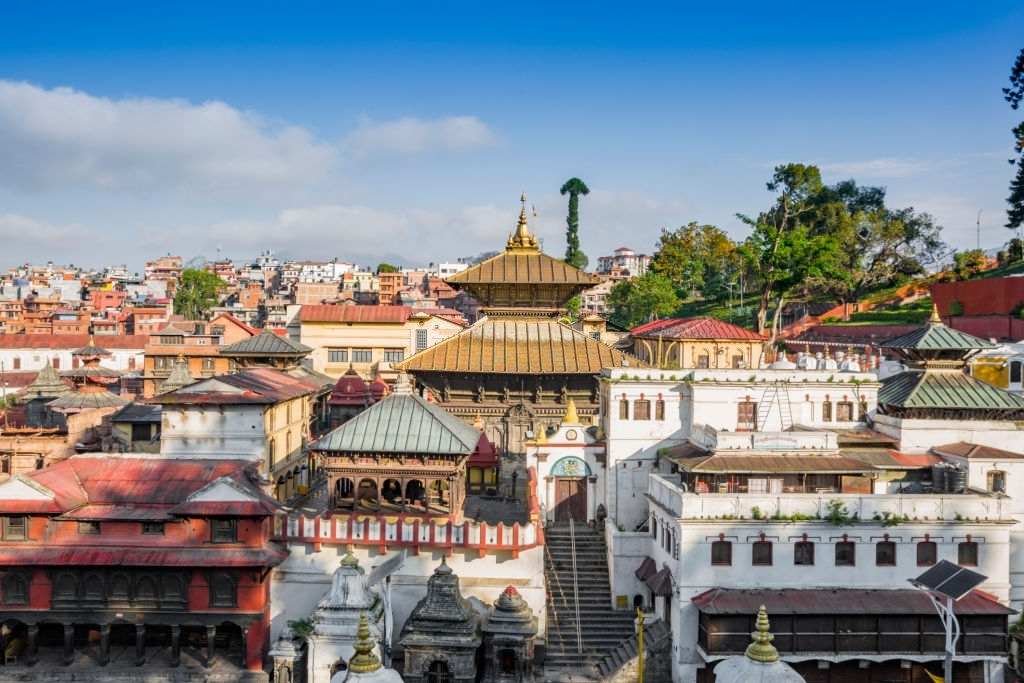 Pashupatinath Temple is significant not only in terms of religion but also in terms of history, as it dates back to 400 A.D.A building with a bunk roof and a golden tower serve as the primary temple. It has a cubic design, with silver sheets covering the four main doors. The two-story roof was also made of pure copper that had been gold-plated. The sparkling Shivalinga and the massive golden statue of Shiva's Bull, Nandi, are the temple's primary attractions. Pashupatinath's Lingam is one of a kind. The Lingam is remarkable in that it has four faces. The faces are oriented in four different directions. Tatpurusha is the name of the face facing East, Sadyojata is the name of the face facing West, Vamadeva is the name of the face facing North, and Aghora is the name of the face facing South. Ishan refers to the Shivlinga's topmost part.Only Hindus are allowed to enter the Pashupatinath Temple's main temple. All other elements of the edifice, besides the main temple, are open to people of all religions. The AryaGhat at Pashupatinath temple is particularly significant because it is the only spot nearby where water is considered sacred enough to be taken into the shrine. Furthermore, because this Ghat is regarded as auspicious, members of Nepal's Royal family are cremated here.

An overview of Pashupatinath temple

For a mixture of religious, cultural, and spiritual experiences, visit Pashupatinath. The temple region also comprises Deupato, Jaya Bageshori, Gaurighat (Holy Bath), Kutumbahal, Gaushala, Pingalezthán, and the Sleshmantak Forest 3 kilometers northwestern of Kathmandu, on the edge of the River Bagmati. About 492 temples, 15 Shivalaya (Lord Shiva shrines), and 12 Jyotirlinga (Phallic shrines) are to be explored. One of the seven UNESCO cultural heritage sites in the Kathmandu Valley is Pashupatinath Temple. It is also a place of cremation in which the last Hindus rites take place. The procedures of cremation are not for the weak; still, people are curiously watched across the banks of the river. For an out-of-the-world experience, visit Pashupatinath Temple.

The narrative of Shree Pashupatinath and PashupatinathkaMandir is presented in several versions. The most known is the history of Pashupatinath, where Goddess Parvati once visited the beautiful riverside of the Bagmati, Lord Shiva, and his consort. They were so enthusiastic about the site that it was suited to divine spiritual practices that they wanted to stay there, and so they took two Deers' guesses. The gods and Celestial Sages, after some time, knew that Lord Siva and Goddess Parvati had acquired the Deer shape on earth. They all asked Lord Shiva and Goddess Parvati first to return to their heavenly dwelling, but Lord Shiva refused to leave. The conflict between the Lord and the gods followed and led to the breakage of one of His horns.
It is reported that this broken Antler was the first Lingam/linga to be placed at the temple of Pashupatinath. But in Mother Earth, this antler or Lingam was lost and none could discover it till the Cow of a cowherd, with its milk {like the Abhishekam, had watered the place], someday. The Cowherd realized that the conduct of his Cow had a deeper meaning and the Lingam came to the cowherd after excavating the hole. Another story behind the Lord Pashupatinath is a Vedic legend that says that in Tripura Samhar Shiva became Lord of all demons and destroyed Tripura in the three cities of Illusion that were ruled by the AsurasKamalaksha, by Taarakaaksha, and by Vidyunmali, which had wretched havoc with an attack on G-d, LordShivah was called Pashupati by Lord Vishnu, and by other gods. Shiva Purana, too, is thought to be an animal (pashu ) and to be liberated from it only by Pashupati, any living being including people in the clutches of his ego, lust, and ignorance.

It is thought that the Pasnupatinatn Temple site was built in 400 A.D. It was created from wood near the banks of the Bagmati River in eastern Kathmandu. The one temple building was destroyed by the termites till it was rebuilt in the 17th century. It's supposed to have been built on the ancient That temple in 400 A.O., where Lord Shiva disguised himself as Deer lost one of His antlers. The main temple of Pasnupatinatn is built in the magnificent Nepalese Pagoda and is divided into a walled courtyard and the courtyard. The main temple sits majestically in the center of an open courtyard at Deopatan on the ground, 23.6 meters above the earth.
The Temple of Pashupatinath was built with intricately sculpted timber rafters and is covered in silver metal with four entrances to the Temple. The temple complex is located on the banks of the Bagmati River, spanning over 264 hectares of land. Inside its complex, the temple de Pashupatinath comprises many more Hindu and Buddhist temples. A golden bull, Nandi, faces BhagwanPashupatinath's main temple, watching His Master and Lord alertly. The Divine Stone Lingam of Pasnupatin, God's Witn of a Silver Serpent, is in The sanatorium sanctum (Garbnagrina). It's distinctive and has four faces to each other on four sides and the top symbolizes several Shiva avatars – Sadyojata or Barun toward the west. Vamdeva is also named Uma Maneswara toward the north, Tatpurusna to the east, Aghor toward the south, and 1snana toward the zenith. Those images reflect Earth, Water, Air, Light, and Metal as the five main components of Hinduism. Every face features two hands like projections with a Rudraksha Mala on the right and a Kamandalu in the left hand.

Pashupatinath is one of the rare places in the world that has a cultural heritage. In contrast to other museums and cultural places, Pashupatinath is an energy center where people participate actively every day, at all times. The Pashupatinath Temple's daily rituals are the following:

At 4:00 am: the West Gate is open to the public.
8:30 AM: The idols of the Lord will bathe and be cleansed after Pujaris's arrival, clothing and jewelry will be replaced by day.
9:30 a.m.: Lord is presented with Baal Bhog or with breakfast.
10:00 am: Then folks are invited to do Puja. The name is Farmayishi Puja too. In certain circumstances, people tell the Pujari to do a unique Puja. The Puja will continue until 1:45 p.m.
1:50 pm: Lunch in the main temple of Pashupati is offered to the Lord.
2:00 pm: end of morning prayer.
5:15 pm: Aarati's night begins in the great temple of Pashupati.
6 p.m. further: The Bagmati Ganga Aarati made by the Bagmati banks recently became more and more popular. On Saturdays, Mondays, and important occasions, there are considerable crowds. Ganga Aarati is performed on the Ganga Aarati night together with Shiva's TandavaBhajan, authored by Ravana.
7:00 pm: Closing of doors.
Besides the regular rituals, during the special occasions of the lunar calendar, unique observations are drawn.

Pashupatinath is a place that practiced centuries-old Hindu rituals in their amazing basic form, providing the visitors an opportunity to sense the unique spirit of Hindu life, death, and reincarnation traditions. It is a wish to go to PashupatinathYatra for everyone devoted to Lord Shiva and to personally perform Pashupatinath puja. The temple is where male worshippers are forced to take off their top/shirt clothes to access the inner sanctuary of the main temple.
The Lord Pashupati mantra is claimed to be so strong that chanting it can even eliminate every Clanger and block it from life once. Whether it is in combat or other parts of life that one can win by chanting 100 times. The singing of the Pashupatinath Mantra might contribute to the devotion of the impossible by the doing of Havana/Hom. The PashupatiAshtakam is commended by the devotee's wish of BhagawanPashupatinath.