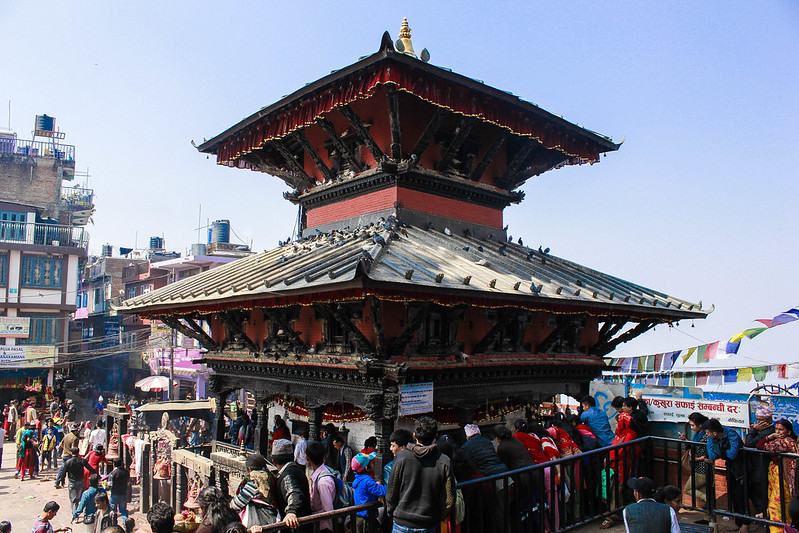 The Manakamana Temple is located 1,300 meters (4,300 feet) above sea level on Kafka Dada Hill in the Sahid Lakhan Rural Municipality in Gorkha, Gandaki Province, Nepal, near the confluence of the Trishuli and Marsyangdi. It's about 106 kilometers (66 miles) west of Kathmandu, Nepal's capital, and around 94 kilometers (58 miles) west of Pokhara. The temple is about 140 kilometers from Kathmandu. It lies 12 kilometers south of Gorkha town and is at a height of 1302 meters above sea level. To the north of the temple, the Manaslu - Himachali and Annapurna ranges may be seen. Trisuli and Marsyangdi river valleys can be found in the south and west, respectively. Manakamana is a reincarnation of the then-queen of Gorkha, according to old history from the 17th century.

Prithvi Narayan Shah established a trust in 1764-65 to worship Manakamana, Bareyshwar Mahadev, and feed the pigeons daily. He afterward made vajracharya priests worship the shrine and contributed a bronze bell, though another story claims it was presented by Girvan Yuddha Bikram Shah. Sur Bir, Kar Bir, Fauda Singh, and Khagda Singh, according to another engraving, erected the gold-plated main gate in 1802-3. The bell was repaired by Kulman Thapa in 1893-4, and the top roof was erected with corrugated copper sheets under the reign of Surendra Bikram Shah. The roof was restored with copper covering by King Mahendra, and later roof trusses were etched with figures of Ashta Matrikas: Brahamayani. Vaishnavi, Maheswari, Indrayani, and Kumari are the four goddesses.
Following the 1934 Nepal–India earthquake and the 1988 Nepal earthquake, Manakamana Temple began to tilt six inches to the southwest. The April 2015 Nepal earthquake caused roof breaches and shifted the temple 9-12 inches to the northeast. Reconstruction began in June 2015 under the direction of the Department of Archaeology and was completed in September 2018 at a budget of 130-140 million Nepalese rupees (NPR). The repair technique included the use of limestone, surkhi, bricks, and wood.

Manakamana Temple was established in the 17th century during the reigns of two Gorkha Kings, Ram Shah, and Prithvipati Shah, according to Nepali folklore. Only the persistent Lakhan Thapa knew about the Queen of Gurkha's "divine abilities" of Manakamana. The monarch saw his wife in the shape of Goddess Manakamana and persisted as a lion one lovely day, and after telling her about it, the king strangely died. The queen sacrificed herself by sitting on her slain husband's funeral pyre, as is customary in Hinduism. Before her death, she told Thapa that she would return, and six months later, a farmer working in the field split a stone, causing a stream of blood and milk.

Thapa went to where the stone was located after hearing about this and began to perform Hindu tantric rituals that stopped the stream. He afterward established a shrine at the same place so their wishes might be fulfilled and the ancestor of Thapa was to be the continuing necessity of the temple. Manakamana is supposed to be Ram Shah's wife, Champawati, she appeared during her son Dambar Shah's reign, and it has been reported in other accounts that she was a founder of the present-day Nepali Prithvi Narayan Shah's rule. The temple is the holy location of Parvati, Goddess Bhagwati. Mana translates "heart" and "kamana" as "desire" and the Bhagwati gives his worshipers' wishes.
Cable Car in Manakamana temple
In the past, the only way to the temple in Manakamana was over a long three-hour long walk. There is now a cable car from Kurintar to Manakamana, only 5 km east of Mugling. In ten minutes more or less the cable car travels across a distance of 2,8 kilometers. The cable car normally runs from 09 am to 5 pm during the day and stops from noon till midday during a lunch break. The cable car Manakamana was opened on 24 November 1998 at Royal Highness, Crown Prince Dipendra Bir Bikram Shah Dev. The mechanism for cable cars was imported from Austria and provides 100% safety.

It contains features like automatically operated generators and hydraulic emergency propulsion in the event of a power breakdown. The staff at the cable car service are qualified to respond to emergencies and are well trained. Kurintar (258 meters) and Mankamana is the highest station (1,302 m) and the base of the cable car in Kurintar. The cable car can accommodate up to 600 people each hour with 31 passenger vehicles and 3 cargo cars. Per carrier, there are six passengers.

Visiting Temple Manakamana offers us the chance to find out more about Nepal's religious significance. There are many tourists both domestic and international here. There are numerous local restaurants around the temple offering authentic Nepalese dishes. At the base of the cable car, some restaurants also offer Western food. Typical gift shops are abundantly available. It is certainly a worthwhile experience to visit Manakamana Temple.