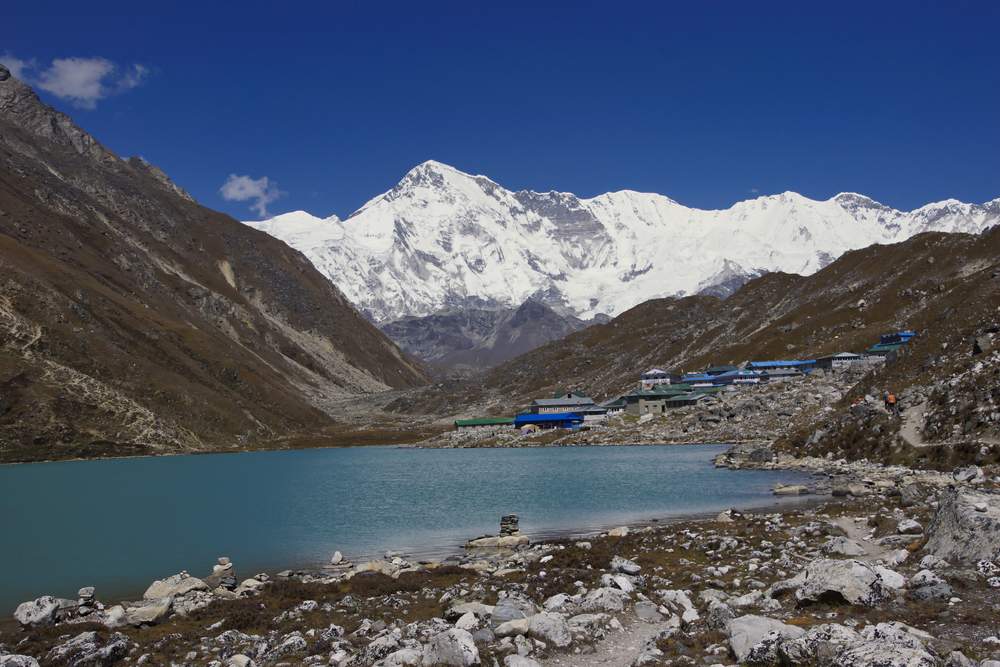 An overview of Gokyo Village

The Gokyo Valley sits on the west of the Himalayan's most famous Khumbu Region, one of the most gorgeous valleys in Nepal. In the peaceful valley, yaks can grass throughout the summer and the magnificent turquoise lakes are truly stunning. After walking to the Everest Base Camp, Gokyo can be visited by adding an additional five days to the route. If the main aim is Gokyo the hike only goes up to Teahouses in Kenjoma on the Everest path (where the trail from Khumjung joins the main trail). From here the trail goes up to Mong La Pass before sharply descending again to the banks of the Dudh Koshi River. This walk passes rhododendron, oak woods, and often ice waterfalls. You arrive at Dole for a couple of hours on this lovely road, where you spend the night in a tea house.

It's Machherma from Dola. The valley overlooking Machherma west is worth visiting and is possible in the afternoon. The unclimbed Mountain.KyojoRi dominates the valley. The last path to Gokyo runs by Pangkha's tea houses and the Ngozumpa Glacier Terminal, the country's largest glacier. You'll finally see the stunningly clear lakes right above the moraine. Cho Oyu (8,153m), one of the 8,000, is seen from Gokyo in the north. The valley offers plenty of beautiful vistas. The most popular is the ascension of the ridge to the northwest for a tiny summit for 2-3 hours. Go from Cho Oyu and Everest through Lhotse to Makalu to enjoy a magnificent panoramic panorama. This view is perhaps superior to that of GorakShep.

How to reach Gokyo valley?

The Cho La pass is the most visited, traveling toward the Khumbu valley next to Lobuche, and the Renjo La pass connects the path from Thame to Nangpa La Pass. Two high passes extend out from the Gokyo valley. You take the alternative exit path to Phortse following the Everest trip. You pass past the settlement of Konaron the East side of the valley. On this side of the valley, there will be no facilities until a six-hour trip from Phortse to Nah's little tea houses. Nah is a good campground, but one has to travel four more hours to reach Pangkha for adequate accommodation. Follow the path outlined above from here.

Gokyo Lakes are oligotrophic lakes at an altitude of 4,700-5,000 m (15,400-16,400 ft) above sea level in Nepal's Sagarmatha National Park. The six major lakes, including Thonak Lake, comprise the world's highest freshwater system. In September 2007, Ramsar was declared as a site in Gokyo and related wetlands of 7,770 ha (30,0sq mi). The Gokyo Lakes are situated in the Solukhumbu District Sagarmatha Zone in Khumjung Village Development Committee in Northeastern Nepal. The main lake, which has an area of 42,9 ha, also known as DoudhPokhari, Gokyo Cho, is located on the eastern shore of the village of Gokyo. Thonak Cho is the biggest 65.07-hectare lake (160.8 acres). Gyazumpa Cho has a size of 29 ha, followed by 16.95 hectares (72 acres) of Tanjung Cho, and 14.39ha of Ngojumba Cho (35.6 acres). They have a considerable hydrological value as sources of permanent freshwater.
Waters come from several sources, such as the Ngozumpa Glacier, a river from the Renjo La Pass from the northwest, and a river from the Ngozumpa glacier to the east. These are freshwater humidifiers fuelled by glaciers and release water via Tejon Lake and the Longabanga Lake to the DudhKosi. The lakes are deeper than the researchers had previously anticipated. Thonak Cho is the fourth lake in the depth (62.4 m) and the Gokyo Lake is 43 m. The lake is also the deepest. There was no direct link between Gokyo Lake and the higher Thonak Cho and Ngozumpa Cho, although those lakes could be connected through subsurface drainage water. The system of Gokyo Lake is of course vulnerable because it lies in an environmentally vulnerable and unstable area. The explosion of the glacier of Ngozumpa is always a danger to lakes. Gokyo lake's 19-lake system covers a total area of 4,600 to 5,100 m, totaling 196,2 hectares (15,100 and 16,700 ft). On the head of DudhKosi, which goes down from Cho Oyu, is the wetland.

Its Religious and touristic importance

Both Hindus and Buddhists consider the Gokyo Lakes sacred. About 500 Hindus bathe in the waters during the holiday of JanaiPurnima, generally in August. An average of 7,000 people visitGokyo Lakes every year. This spot is adored as 'Nag Devata' (Snake God) resident and is situated on the west corner of the lake, at the Temple of the Hindu deities Lords Vishnu and Shiva. Traditionally protected fauna is the concept that birds and wildlife in the area are not damaged.
Gokyo is one of the most popular places leading to the base camp of Sagarmatha and other regions. The settlement of Gokyo is an important hub in the area at a height of 4.790 m (15.720 ft). The place is uphill for two days from Namche Bazaar. GokyoRi Climbing is typically a visit to the area. Also part of the Everest base camp, known as an EBC tour through Gokyo Lakes, are the Gokyo Lakes. The lagoons. This journey is frequently followed by those who are somewhat longer than the conventional EBC journey, as the trail is four days longer. In contrast to the regular EBC route which returns along the same trail, the Gokyo-Lake Trek has the bonus of a circular path.

The peak of Gokyo Valley: GokyoRi

The Gokyo Summit in the Khumbu region of the Himalayas Nepal is a 5.357m (17.575 ft) high summit. It lies on the western side of the Glacier of Ngozumpa, the most important glacier in the Himalayas in Nepal. A little hamlet of a few stone buildings and one of the highest in the world, Gokyo (4,750 m, 15,583 ft. above sea level) located at the base of GokyoRi. Four peaks of 8,000 meters: Mountain Everest, Lhotse, Makalu, and Cho Oyu can be seen from the top of GokyoRi. In the region are the Gokyo Lakes. The main Gokyo Trek ends with another higher hill to the north. It is at 5,483 m above sea level. It stands at 17,989 ft.

Gokyo valley is one of the underrated valley in the mountains and many people and tourist (both international and national) don’t know about it that much. But I can make sure that you won’t regret going Gokyo valley. It has many things to offer; many lakes and rivers and nice hospitality will always welcome you. If you are searching for beautiful and peaceful destination then it is the best place. You can also add it to your bucket list.