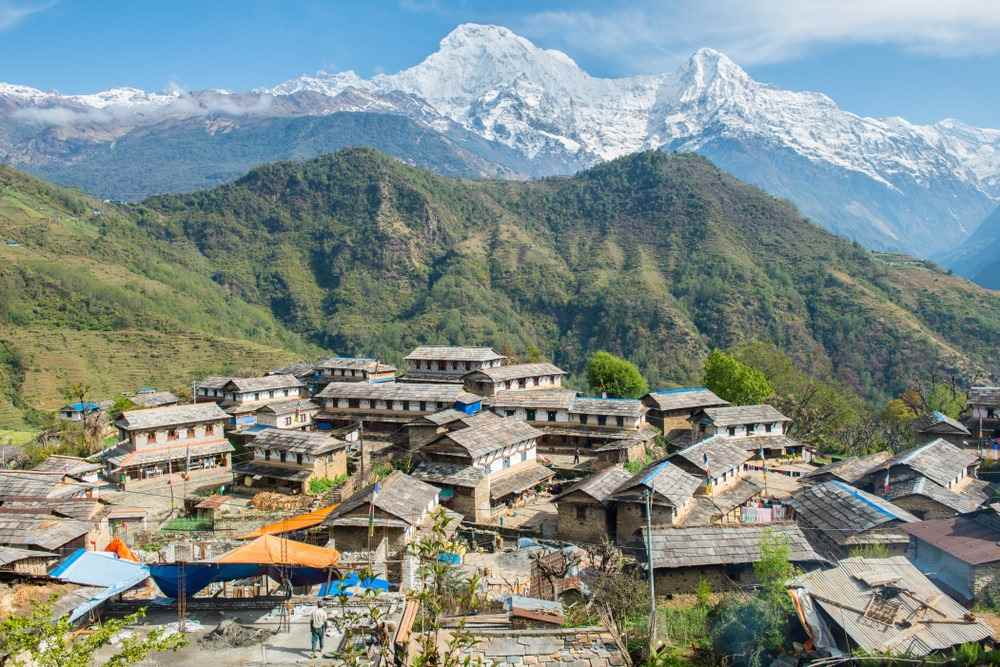 Ghandruk is located northwest of the lakeside town of Pokhara, at 2.010m (6.600f). It can be accessed on a day, after a short walk from the town, for four to five hours. Because the village is on the most popular route to the shrine of Annapurna or Base Camp of Annapurna (also referred to by the trekkers as 'ABC'), it is the best-known and popular trekking region in Nepal. Ghandruk (Ghandrung on some maps) also saw a gradual growth for domestic tourists following the opening of the Pokhara-Baglung highway in the mid-90s. Ghandruk is a convenient business destination, with easy access via the road, followed by an easy five-hour hike and with only a mild physical challenge. The first leg of the journey starts from Pokhara where you can drive your car or hire a vehicle or pick up a bus on the first 55 km of road Pokhara-Baglung. The road goes up and down by many turns past noticeable towns, such as Hyangja, Phedi, Naudanda, and a foggy pine forest mountainous area called Lumle.

If your destination is limited to Ghandruk, the trail is sufficiently popular and easy to do without a guide and is well utilized both by trekkers and locals. Foreigners are, however, advisable to consult either in Kathmandu or Pokhara on travel permits and if necessary guides or porters. As you walk along the riverbanks of Birethanti, the path divides into two—one goes west to the Bhurungdi River tributary to Tikhedunga, and after that to the Ghorepani (or Ghodepani), an old horse watering area (ghodepani) on a forested old track. Birethanti's well-stocked shops can tempt you to buy something important for your walk. But be aware of the many places of the busy Ghandruk trail itself which also holds sundries from superglue to batteries, Toblerone chocolates, mars and snickers, electricity drinks, beer, and other things, aside from serving tea, soft drinks, and dal-Bhat (rice and lens).

The Gurungs are an ethnic group that certain people believe originated in Mongolia and are Tamu in their language. They are known by the British as a ' martial tribe' and they are renowned in the British, Indian, and Nepal for bravery as Gurkha soldiers. Several Gurung soldiers came home for their bravery from the First and Second World Wars with Victoria Crosses. The Gurungs are located across the Annapurna Range on the southern slopes. After Siklis, Ghandruk is its second-largest town, far east. The Gurungs of Ghandruk are today considered a wealthy community, which has prospered economically from good salary paychecks and pension benefits earned from service, like the British Gurkhas and recently from trek tourism, and previously reliant on livestock hunting in the higher woods, and sedentary farms on the terraced hillsides. In practice, the old tendency to join the British Army is still far less than in the past. In recent times, young people have been seeking other jobs in Mideast, South-East, and East Asia, which are rich in oil. And the hospitality business thrives as a result of the flourishing traffic of trekkers here on the hills of the Annapurna and the looks of many lodges, inns, and tea houses.

Ghandruk's views are fantastic. To the east, a glacier-fed Modi River dramatically leads on terraces to a deep gorge. The densely wooded hill is high above the fields. This small group of spots across the valley on the hillside is Landruk. One route through these hills is popularly referred to as a "loop trek," which takes tourists back from Ghandruks through Landruk, Pothana, Deurali, and Dhampus to Phedi at the very tip of the Pokhara Valley on the east side of the valley. To the east of Ghorepani and Pun Hill, the hills roll over and over across a high forest. And looking to the south, eyes descend in the deep valley of Birethanti and Nayapul, walking along the Modi River. However, the most spectacular view is to the north up to the scattered pinnacle of craggy snow, which looks down on this place in Gurung.

The scan of your eyes from left to right and the snowy giants, Machhapuchhre at 6,993 meters and his sister peaks is almost hypnotical: Annapurna III, Gangapurna, Hiunchuli, and Annapurna South at heights of between 6,441 meters or 21,132 ft. (Hiunchuli) and 7,555 meters or 24,787 ft (Annapurna-III). No words can righteously do them. The magic is finished. And the timeless moments preserved in your camera and mind are all you can take back. Far from the point of view of the village of Ghandruk, Machhapeckhre is the most photographed peak. The village center is occupied mainly by the lodges and the inns and by many well-built buildings with a labyrinth of stone alleys up and down and crossing each other. Ghandruk has over 20 lodges and guesthouses for a small village. You will find the older, more traditional houses higher as you walk along, taking rare glimpses into the rural world. Good humor and friendly, with a warm smile and a "Namaste," each Gurung man or woman you meet greets you.